The Return of Some Sunday Soul 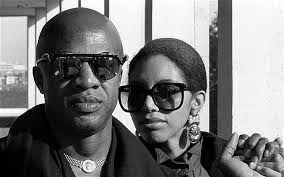 Some soul royalty this week in the shape of Cecil and Linda Womack collectively known as Womack &Womack.
Cecil was the younger brother of the great Bobby Womack and Linda is the daughter of the great Sam Cooke and also Bobby's step daughter given that he married Sam's widow Barbara.

Talk about keeping in in the family. Indeed the 1988 album Conscience from which these songs are taken features more Womacks than a Womack convention.
In addition to Cecil and Linda there are Travis B.Womack, Earl "the pearl" Womack,Naomi Womack and the Virginia Womack family.Alas no Uncle Bobby.

Conscience appears to be a concept album.
In Song 5 - the woman charcter cotinues on to try and live without her love,her hurtness shines through the teardrops that drip on the dance floor as she tries to party her blues away

And in Song 8 - Love is the most important force in the universe. Only love can conquer the negative force.If you find love,embrace her.Don't reject it-as most people do

I'll leave you to work out which song is which.