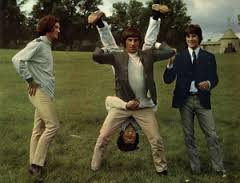 Such is the randomness of Saturday Lucky Dip that on the last Saturday in June we find ourselves featuring An Autumn Almanac - 15 Songs in the Spirit of Ray Davies - an Uncut compilation from December 2010.

A downside of the randomness, however, is that I have absolutely no system and no idea which compilations have featured and which have not. So some may be getting a second airing prior to others getting their first play. Not so in this case happily.

We start with Kate Rusby's cover of the great man's Village Green Preservation Society which was the theme tune to a truly awful sit-com Jam and Jerusalem about the goings on in a WRVS branch.
We then go to pretty much the opposite end of the spectrum with Wild Billy Childish and the Musicians of the British Empire and Joe Strummer's Grave.
From a fantastically titled album Punk Rock at the British Legion Hall. To the best of my knowledge this has never featured in a sit-com.