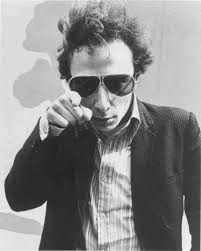 Howlin' Wind from 1976 is the debut album by Graham Parker and the Rumour and an announcement to the world of a great new soul voice and  a top class band,
It has only recently found its way onto the CC shelves to join a good few of his others and is the final recent St Andrews purchase to feature and indeed the only vinyl acquisition from that trip.

And what a terrific record it is too from the former Camberley petrol pump attendant.He had touted demo tapes around London to considerable acclaim but it was felt by the record companies that he needed a band.
He was introduced to a certain Dave Robinson then running the Hope and Anchor who put him in touch with members of the recently defunct pub rock bands Brinsley Schwartz, Ducks De Luxe and Bontemps Roulez who were rehearsing under the name of the Rumour.
It was indeed a musical marriage made in heaven.
Produced by Nick Lowe, six of the  twelve songs from the album (including the two below) feature in the 1980 Best of compilation also on the Vertigo label.