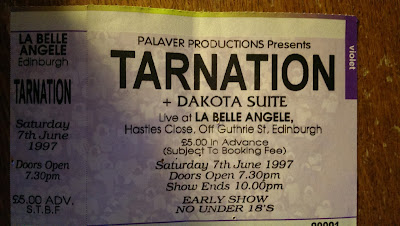 Again a slight break to the usual Sunday schedule as we commemorate the 18th anniversary of the second time I never saw Tarnation on 7th June 1997.
I awoke as you would expect in an extremely hungover state dreading the train trip to Edinburgh where, yes you've guessed it, I had a ticket (ticket number 00001 in fact) to see Tarnation perform in a place called La Belle Angele.
To be quite honest I wasn't really expecting much and I was not disappointed.
I got to Edinburgh mid afternoon and had a wander. I found La Belle Angele and there was a sign on the door advising that the concert had been cancelled due to adverse weather conditions in the Irish Sea -bear in mind that this was June and that they were supposed to have played in Sheffield the night before and not Belfast or Dublin.
So there you have it I never got to see Tarnation. They split up shortly thereafter (or perhaps even a few days previously).
I thought about getting a rebate for my ticket but never got round to it and I therefore keep it as a memento of a slightly different  twofer.
It has taken my 18 years to get over the trauma and write about it.
Palaver Productions indeed!