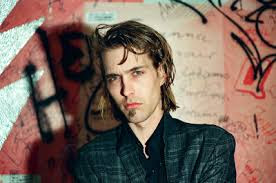 Yesterday Chuck Berry, today Chuck Prophet. Do you see what I did there?
This blog isn't just thrown together you know. Oh no, several  careful minutes have gone into it's preparation.

Charles William Prophet is as you will all know a former member of Green on Red but has gone on to enjoy a long and reasonably successful (or critically acclaimed at least) career as a solo artist with over a dozen albums to his name.
Today's tracks come from his third solo album Feast of Hearts from 1995. The only other one I have is the follow up 1997's Homemade Blood  and I suspect that like Matthew Sweet albums I should own many more. I  further suspect that you will concur and point me in various directions.
I once witnessed him nearly electrocuting himself on stage at King Tuts.

As an aside Chuck, like Hank, is a peculiarly American name. In Britain Charles would be shortened to Charlie, Chas or even Chic! Never Chuck which is a word associated with throwing and indeed throwing up.If you are particularly unlucky you may also find yourself being chucked when a love affair has run it's course