This Song Belongs to P.F.Sloan 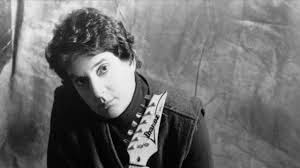 P.F, Sloan is a singer but predominantly a songwriter who was pretty prolific and pretty successful in the 60's  penning songs for the likes of Jan and Dean, The Searchers, Herman's Hermits  and The Turtles. He is also the author of Eve of Destruction the huge hit for Barry McGuire.
He recorded a comeback album Sailover on Hightone in 2006 where he was joined by guests including Lucinda Williams, Frank Black and Buddy Miller. The excellent Soul of a Woman is from that album.
Fellow songwriter the great Jimmy Webb wrote a song about him subsequently covered by Jackson Browne, Jennifer Warnes and Rumer.
However, they subsequently fell out leading to Jimmy claiming that he had made the name up (as you do)

P.F.Sloan - Soul of a Woman