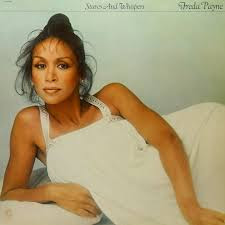 When I was re-filing Howlin' Wind by Graham Parker I came across the adjacent Stares and Whispers by Freda Payne which I had forgotten that I had.
Now the more alert among you may well be saying - hang on a moment I thought he filed his music by genre not alphabetically - and you would be half right.
The CDs are filed by genre but the vinyl is alphabetical as there is considerable less of it - cue much wailing and gnashing of teeth in certain quarters.

Freda Payne is of course famous for Band of Gold her million selling single from 1970.
Stages and Whispers however, like similar albums I have by Candy Staton and Betty Wright, is from the late  70's (77 in this case) when soul was pretty much in the doldrums and disco was in full flow.
It is therefore of its time and I suspect that there are many better Freda Payne records out there.
However I would surmise that Saving a Life a duet with Cliff Richard on his Soulicious album is not one of them.

Freda Payne - Bring Back The Joy
Posted by Charity Chic at 08:00