That's a New One on Me But then Again Maybe Not 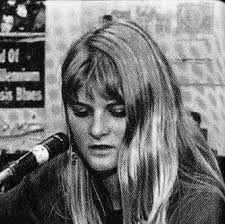 Often when my blogging chums post a song or artist that I am not familiar with but quite like I will comment along the lines of that's a new one on me
However a recent listen to the Rough Trade Singer Songwriter 1 Compilation showed that this is indeed not always the case.
I think it was Scott who posted a couple of songs by Barbara Manning (pictured above) Very good and new to me or so I thought. However it turns out that Scissors features on this compilation.
Swiss Adam and others have fairly recently been waxing lyrical about Jane Weaver and her album The Silver Globe. Turns out I've also heard her before courtesy of this compilation.
I was familiar with Tracey Thorn because of Everything But The Girl..Brian brought her previous work with The Marine Girls to my attention and again I now realise that I have previously been privy to some of her solo stuff.
I should probably listen to some of my records more closely.

Jane Weaver - Is Everybody Happy?