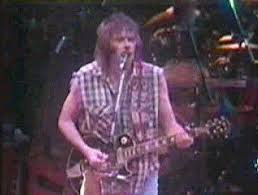 There is a school of thought, and one  which I subscribe to, that you can't have too many live Neil Young albums.
So when I saw Cow Palace 1986 in a Cupar charity shop on a brief pit stop on the way back from St Andrew it was a must have.
It is a recording of a KLOS FM Los Angeles broadcast of a concert at Cow Palace, Brisbane, California on the 22nd of November 1986.
When we got back to the car and headed off I went to put it on and noticed Disc 1 was missing. So no Heart of Gold, After the Goldrush and Cortez the Killer amongst others.
Still Disc 2 containing 12 songs and at over 73 minutes long is was well worth the £1.49 I paid for it.

A few old standards and a few new to me songs so I have gone for one of each..
To start with I've gone for the opening track Sample and Hold  originally on his 1982 album Trans which is quite synthy in nature with extensive use of  of a Sennheiser Vocorder VSM201.
Then back to something far more familiar Powderfinger which vies with Cortez as my favourite live Neil Young song
Look out Mama, there's a white boat comin' up the river.