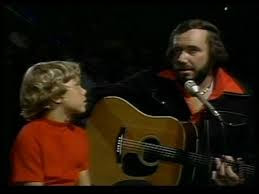 Bobby Bare Junior guests on Wednesday's featured album Down to the Promised Land with a live version of Guitar Playin' Woman.
Whilst he later went on to sign for Bloodshot his 2000 album Brainwasher, on which he makes a splendid racket, was released on Immortal Records.
He had his first hit record at the age of eight when he appeared with his old man Bobby Bare on the Grammy nominated Daddy What If