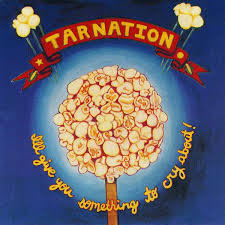 A slight break to the usual Saturday schedule as we commemorate the 18th anniversary of the first time I never saw Tarnation on 6th June 1997.
At the time they were just about my favourite band on the planet and in an advanced state of excitement I got a train from Glasgow to Sheffield to see them play in a place called the Boardwalk.
I met up with my mate Pete who stayed in Sheffield at the time and George who had driven up from Birmingham.
The support band Dakota Suite appeared and from memory put on a pretty good set.
Then there was the usual delay for the main act and delay and delay - you get the picture.
It became increasing obvious that Tarnation were not going to appear.
Pete and I got drunker and drunker and George drove home.
We got chatting to the bar owner who had allegedly played with Van Morrison at some stage and he regaled us with tales of the Grumpy Irishman.
He hazarded a guess as to what hotel he thought Tarnation may be staying in which led to a series of drunken calls from Pete and I demanding to speak to Paula Frazer - to no avail.