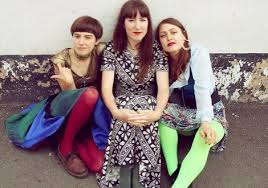 Stealing Sheep first came to my attention recently when I saw their new album Not Real described as a cross between folk and  soul. Naturally that whetted my appetite and they joined the ever growing list of bands to be checked out.
I duly checked them out at a recent trip to Fopp but given my precarious financial situation I opted for the cheaper 2012 debut album Into the Diamond Sun.
I can't really see the soul reference on this one. Folk, certainly. Described on the ubiquitous on line encyclopedia as Psychedelic Folk.
From Liverpool they consist of Rebecca Hawley (vocals and keyboards), Emily Lansley (vocals and guitar) and Lucy Mercer (vocals and drums)
I quite like their stuff but I suspect that it is probably better in relatively small doses.
They put me a wee bit in mind of Twa Toots