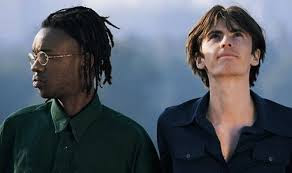 A musical marriage made in heaven. Former member of Suede, serial producer and cardigan wearer Bernard Butler teams up with David McAlmont  a soul singer with a three octave voice to come up with 1995's The Sound of McAlmont & Butler.
Yes, described in the British Hit Singles and Albums as a conceptual masterpiece, superbly arranged and thrillingly executed reached the dizzy heights of number 8 in the UK singles charts.
The second song I have selected and indeed the second song on the album What's the Excuse This Time? has an air of His Purpleness about it - no bad thing, I'm sure you'll agree.

They went their separate ways thereafter to carry out their own individual projects re-uniting briefly in 2002 with Bring it Back. A single Speed briefly appeared in 2006 but a third album has yet to appear

McAlmont & Butler - What's The Excuse This Time?
Posted by Charity Chic at 08:00