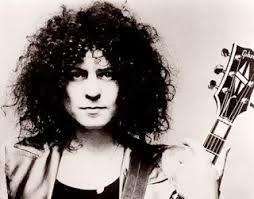 Get it On an Uncut compilation from October 2011 has the sub title The Music that made Bolan boogie.
It is however highly unlikely that he was involved in choosing the tracks given that he died in 1977.

Rather it is a collection of 15 Rock'n' Roll and Rockabilly tracks featuring the likes of Dale Hawkins, Roy Orbison and Carl Perkins all of which were recorded between 1956 and 1959 meaning that they are in the public domain and therefore Uncut is not required to pay for featuring them.
You will get no arguments from this quarter as to this canny piece of business particularly when the music is this good.
We start with all 1 minute 36 seconds of Big Bop Boom by Micky Hawks - tremendous stuff.
This is followed by two much more famous artists in Jerry Lee Lewis and Johnny Burnette