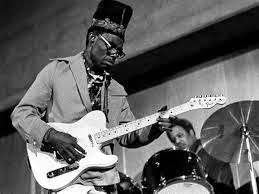 When I acquired the 40 or so CDs that I have in The Blues Collection from a charity shop a couple of years ago one of the many artists I was totally unfamiliar with was J.B. Hutto.
Joseph Benjamin Hutto was born in Blackville,  South Carolina in 1926 , dying from cancer in Harvey, Illinois in 1983 at the age of 57.
He was a slide guitarists influenced by the great Elmore James
These songs are from an album called Pet Cream Man recorded in Carlisle , Massachusetts on 1st April 1982 by which time the cancer that was to end his life had already taken a grip of his body. When you consider this it makes these powerful and energetic songs all the more remarkable.
An intriguing album title and one which sadly I have not got to the bottom of other than to note that it appears to be the name of one of his songs albeit one which does not feature on this album.