Emmylou and Flaco and George 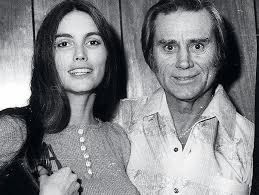 There is a time in many artists careers when they find themselves reasonably well established that they consider it would be a good idea and good fun to do an album involving a number of chums and to call to Friends or some such thing.
Needless to say that Emmylou features on many such albums because let's face it she is everyone's friend.

The world's greatest living accordionist (now that Sir Jimmy Shand has moved on) Flaco Jimenez has one such album entitled Partners.
He is joined by the likes of Dwight Yoakam, Ry Cooder, John Hiatt, Linda Rondstadt and of course Emmylou who provides lead vocals on the Butch Hancock song West Texas Waltz.

George Jones' album of a similar ilk is billed My Very Special Guests and features amongst other Elvis Costello, Willie Nelson, Tammy Wynette and Linda Rondstadt (again). Emmylou duets with George on the Rodney Crowell song Here We Are (although from the above photo I suspect George has absolutely no idea where he is).
More Emmylou and friends next week

George Jones (with Emmylou Harris) - Here We Are
Posted by Charity Chic at 08:00