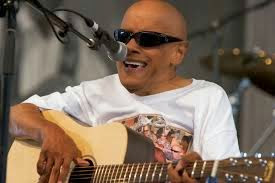 The splendidly named New Orleans guitarist Snooks Eaglin is another new name on me.
He was not christened Snooks as that would have just been plain silly. No, he was born in New Orleans in 1936 and christened Fird Eaglin Jr.
He was also known in his early years as Blind Snooks Eaglin for reasons that I'm sure you can work out.
He is I am told widely regarded as a legend of New Orleans playing a wide range of music within the same concert or indeed song covering blues, rock 'n' roll, jazz,R&B, country and Latin.

There are indeed a variety of styles on Heavy Juice.
As this is the Blues Collection I've gone for a couple of the more bluesy numbers.
I Went to the Mardi Gras  was recorded in New Orleans in November 1994 and Pretty Girls Everywhere in Metairie, Louisiana in October 1986.

Snooks died in 2009 following a heart attack at the age of 73, a pretty good innings for a Bluesman

Snooks Eaglin -I Went to the Mardi Gras