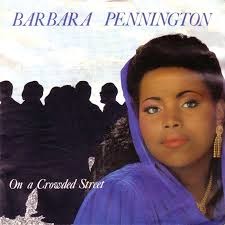 No Talcum Soul this week.
I have next to no vinyl singles in my collection. However a couple of months ago I picked up a handful from a bargain bin with a view to them possibly featuring on the blog.
Obvious proof then that blogging is killing music.
One of the purchases was a total shot in the dark - On a Crowded Street by Barbara Pennigton. I'd never heard of it or her.
It was a bit of a result to find out that it was actually pretty good.
Subsequent research tells me that she was an American Hi-NRG and Soul singer from the 70's and 80's.
Hi-NRG is a new one on me but apparently is   a genre of uptempo disco or electronic dance music that originated in the United States and United Kingdom during the late 1970s.
It also turns out that I also have another one of hers 24 Hours a Day on the Crimson This is Northern Soul compilation

Barbara Pennington - On a Crowded Street

Barbara Pennington - 24 Hours a Day
Posted by Charity Chic at 08:00