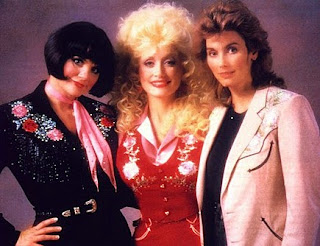 After a few weeks of Emmylou duets we go ne better this week with Trio an album she recorded with fellow Country superstars Dolly Parton and Linda Ronstadt.
it was released in 1987 as you can probably tell from the hairstyles and was eventually followed up by the imaginatively title Trio II in 1999.
It was massive selling over 4 million copies and picking up two Grammy's the the process.
It is relatively easy to pick out Dolly's contributions but the vocals of Emmylou and Linda are much more similar.As a threesome they also harmonise wonderfully
One that everyone knows followed by a perhaps less familiar one where Emmylou get her acoustic guitar out.
Still a couple more Emmylou and friends to go!

Emmylou, Dolly & Linda - To Know Him is to Love Him