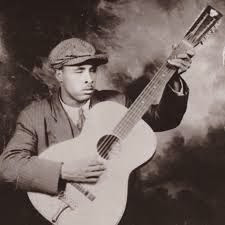 I bought Statesboro Blues, Blind Willie McTell's contribution to The Blues Collection for 49p at the weekend.
I was reasonably convinced that I already had it and so it turned out.It was however worth a punt because if I hadn't bought it and subsequently discovered I hadn't got it and went back and it wasn't there I would be somewhat peeved.
Anyway an omen that Blind Willie should feature this week.
The two songs featured are from 1927 and 1928 so hardly surprising that they come accompanied by a degree of hiss. However the purity of his voice and his guitar playing skills shine through.

Mrs CC came in with a job lot of sausages and I had the lovely task of separating them into twos and threes for freezing purposes. Let me tell you that Blind Willie is just the man to make this arduous task more easy.