What Was The Name of that Album Again? 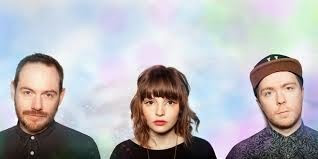 I have been finding it increasingly difficult to remember the names of some albums that I have  fairly recently bought.
This is either because they are relatively new, they are the only album I own by the artist or else I am slowly losing it. I suspect the latter.
If you were to put a gun to my head I suspect that I would be unable to tell you that my albums by Slowclub, War on Drugs and Withered Hand are respectively titled Complete Surrender,Lost in the Dream and New Gods
Another example is The Bones of What You Believe by Glasgow electronica trio and spellchecker's least favourite band Chvrches.
It has to be said that all these albums are very good indeed
In a sign of the times I note that in addition to films Chvrches music also features on a number of computer games.
I see they have started recording a new album. If and when I get it I will need to start remembering the names or else take to referring to them as Chvrches 1 and 2