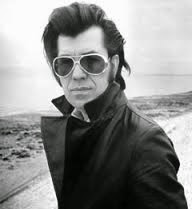 My trip to Elvis Shakespeare's Records and Books also yielded Columbia Rockabilly Volumes 1 and 2 previously marketed as Ain't I'm a Dog and Whistle Bait.
An artist who features on both of the albums is the King of the Surf Guitar Mr Link Wray
Born in Dunn, North Carolina in 1929 he was christened Fred Lincoln Wray Jr. His success in Europe saw him relocating to Denmark where he died in 2005 at the age of 76
Rolling Stone magazine has him at number 45 in the greatest 100 guitarists of all time and he certainly was a huge influence on those who followed with his distorted sound and the invention of the power chord.
A man well ahead of his times.
New Studio Blues dates from 1959 but was first released in 1992.
Raw-hide  also from 1959 is one of the songs which first brought him to prominence.