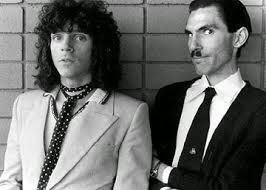 I've been reading that Franz Ferdinand have been collaborating with the Mael brothers with a view to touring and releasing a record under the superbly titled name of FFS.
A few years ago I realized that there were no Sparks records on the shelves.It was a straight choice between Kimono My House and a Best of. I chose the Best of. Wrong move.Their later stuff is not in the same league as the stuff from the Kimono era.
Also, I consider much of it to be pretty sleazy no doubt trading on their slightly creepy image.One song in particular Young Girls I find particularly disturbing and offensive.
Perhaps Franz Ferdinand should think on.
Here is some of their brilliant early non-sleazy stuff

Sparks -This Town Ain't Big Enough For Both of Us