The Penultimate Emmylou and Friends 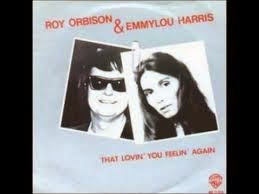 Nearly there now - only two weeks to go
This week we feature two songs from film soundtracks
From 1980 Emmylou appears with another musical giant in the shape of the Big O himself Mr Roy Orbison with That Lovin' You Feelin' Again taken from the soundtrack of a film called Roadie.
I'm not familiar with it but  research tells me it was directed by Alan Rudolph and is about a truck driver who becomes a roadie for a travelling rock and roll show.
It gets between one and three stars from various reviewers so no classic I suspect.

I have seen the other one which is O Brother, Where Art Thou? The Coen Brothers rarely make a bad film but in this case they clearly were prepared to make an exception.
The soundtrack,on the other hand, thanks to the production of T Bone Burnett is absolutely terrific.
Emmylou makes a very brief appearance in the company of Gillian Welch and Alison Krauss.

The final selection next week.

Emmylou Harris with Roy Orbison - That Lovin' You Feelin'Again