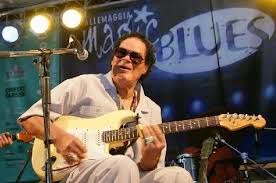 This week's Blues Collection offering is for our new friend Christian who hails from Louisiana and it is none other than Louisiana Red himself.
Disappointingly Mr and Mrs Red did not have a wee boy called Louisiana  on 23rd March 1932. No rather Mr and  Mrs Minter had a wee boy Iverton and in Bessemer, Alabama too as opposed to Louisiana.
He recorded over 50 albums and like many of his contemporiares ended up living in Europe dying in Hanover, Germany in 2012 at the ripe old age of 79.
At first given his moniker I had him down as a pre-war Bluesman but his career was from the sixties up to his death.
He wrote most of his material and often delivered it in the style of the greats such as Muddy Waters, Elmore James, John Lee Hooker or Lightnin' Hopkins earning a reputation as a "blues chameleon"
These two songs were recorded in London probably in late 1990 and they are about women who spurned him,cheated on him or otherwise did him wrong.
Such is the lot of a Bluesman.