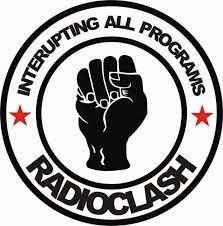 This week's Saturday Lucky Dip is not a totally random choice of CD.
It is Radio Clash  a Mojo compilation from October 2004 which was kicking about as I took the recent Janie Jones track from it.
It contains a number of Clash associated songs together with some "personally selected by Mick Jones and Paul Simonon and which showcase their influences"
And here is where the element of randomness comes in.
The Clash were well known for their love of reggae and the CD contains a few reggae numbers. I have gone for Black Man Time by I Roy.
I'm not sure that you would readily associate The Spencer Davis Group with The Clash but this live version of Every Little Bit Hurts is terrific.
I was tempted to include Part Time Punks by the Television Personalities as many of us once were. However it has not really stood the test of time and now comes across as a fairly cheesy novelty record.Perhaps it was always a fairly cheesy novelty record.