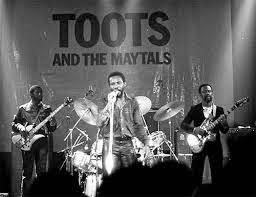 Possibly as far back as last summer I was torn between posting Jimmy Cliff or Toots & the Maytals.
At the time I opted for Jimmy with a promise that I would post Toots (or Frederick Hibbert as he is known to his mother) at a later date.
So here it is and better late than never I'm sure you'll agree
I saw them live at The Arches in Glasgow a few years back and they were absolutely tremendous.
They have had more number one hits in Jamaica (31) than any other artists.
And these I suspect were two of them

And for those who actually thought you were going to get Twa Toots here you go
Posted by Charity Chic at 08:00