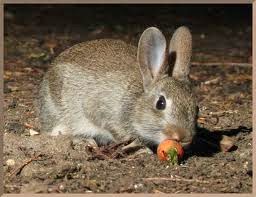 Those of you cultivating vegetables will be living in fear of a visit from one of our little furry chums on the look out for a free feed.
I am told that they are quite tasty particularly in a pie or a stew
However if this is not your bag you could always try distraction by playing them Rabbit Songs the 2002 debut album on Dreamworks by Brooklyn based band Hem. They will be so enthralled that they will stop munching and put their rather large ears to good use.
Purchased along with their second album 2004's Eveningland on Rounder for a fiver in a St Andrews charity shop.
Sally Ellyson on vocals.You will have heard the second song before but not necessarily by them.