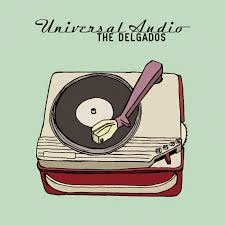 Universal Audio on Chemikal Underground from 2004 was the fifth and final album by Motherwell's finest The Delgados.
A tremendous album with a tremendous cover.
The Delgados were Alun Woodward (vocals/guitar), Stewart Henderson (bass), Paul Savage (drums) and Emma Pollock (vocals)
All are still prominent in music - Stewart Henderson as heid honcho at Chemikal Underground, Paul Savage as an engineer and producer. Alun Woodward as a solo artist under the guise of Lord Cutglass and Emma Pollock also now a solo artist and someone who has previously graced the pages of CCM.
I saw their last Glasgow concert at the Garage in 2005. They were terrific but my abiding memory is the support act The Sundowns quaffing bottles of Buckfast on stage from ice buckets (you can take the boy out of Lanarkshire ..... )
Stewart Henderson gets a mention in John Peel's Margrave of the Marshes autobiography for taking the great man to a pub quiz in the Electric Bar in Motherwell when he was doing his Bands of Britain series episode featuring Bellshill

The Delgados -Is That All You Came For?

The Delgados - Everybody Come Down