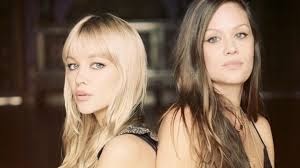 Sisters Alison and Catherine Pierce have been making music since 2000.
Born in Birmingham, Alabama but working out of Los Angeles they shot to a degree of fame in the UK in 2010 after being featured on Later with Jools Holland where they promoted their single Glorious.
This features on their 2011 album You and I , their fourth album which was moderately successful in the UK. They have yet to make a notable impression in their homeland.
I have heard them being compared to Stevie Nicks era Fleetwood Mac but they are better than that. Their music has a 60's feel to it and puts me in mind of the Polyphonic Spree and musicals such as Hair and Godspell.
It also has a nice summer feel to it
A fifth album Creation is scheduled for release in September 2014

The Pierces - Love You More
Posted by Charity Chic at 08:00