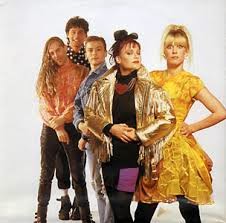 I bought Honey Lingers a 1991 album by Voice of the Beehive the other day for 99p.
Side two is a bit gubbed but side one plays fine and contains these two great pop songs.
The album got to number 17 in the UK  with Monsters and Angels getting to number 17 and I Think I Love You to number 25 in the singles charts. I thought that they had been more popular than that.

Voice of the Beehive were an Anglo American combo.
They were fronted by Californian sisters Tracy Bryn (who is now a teacher) and Melissa Brooke Belland (who now runs a company called "Made in Heaven")
The band members were Brits - Martin Brett (also known as Brett Martini) on bass,Daniel Woodgate on drums and Mike Jones on guitar.

Voice of the Beehive - Monsters and Angels

Voice of the Beehive -I Think I Love You