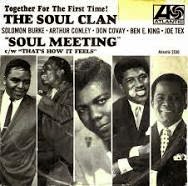 A collective set up in 1966 by Solomon Burke with Otis Redding, Wilson Pickett, Joe Tex and Don Covay
By 1998 as you can see from the picture Otis and Wilson had been replaced by Arthur Conley and Ben E King. To add to the superstar status the recently sadly departed Bobby Womack co-wrote this song with Don Covay.

All these artists have appeared before individually on SSS with the exception of Solomon and Ben E.Solomon has appeared on CCM before but not as part of SSS.So  time to put this right.

Here is Solomon from the same glorious Kent Sanctified Soul album from which That's How it Feels was taken with his version of the country classic He'll Have to Go immortalised by the great Jim Reeves.
Ben E King went on to become a Drifter. Here he is with the classic Leiber and Stoller song Spanish Harlem.

The Soul Clan -That's How it Feels

Solomon Burke -He'll Have to Go