I Heard a Rumer 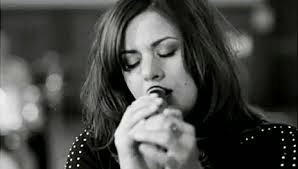 Sarah Joyce has a voice often compared to the late Karen Carpenter. To me there are also similarities with A Girl Called Eddy.
If the name Sarah Joyce does not mean anything to you , you may know her better as Rumer. Described somewhat cryptically by The Guardian as "the best act of her kind"
Born in Islamabad in 1979  she shot to fame with 2010's Seasons of My Soul.
She followed this up in 2012 with a covers album  Boys Don't Cry both albums peaking at number 3 in the UK album charts.
She has also been championed by Burt Bacharach leading to a Christmas  EP imaginatively called Rumer Sings Bacharach at Christmas.
A Jools Holland and Radio 2 favourite.
I suspect that the takedown police may take an interest in her music so you will forgive me if I just state the titles.
The second song in particular is rather lovely.

Aretha
Posted by Charity Chic at 08:00