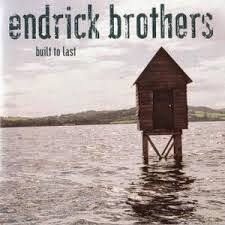 I swithered as to whether to include this in the series. But it is Scottish, it's on the shelves and there is a country influence.
It is just a record that I rarely play. In fact I may only have played it the once prior to listening again before posting this.
The Endrick Brothers have released two albums. 2005's Built to Last on Hypertension a German label which I purchased for a quid in a short lived stack 'em high sell 'em cheap bargain shop in Shawlands Arcade, Glasgow.
I do not own the 2007 follow up Attraction Versus Love and haven't really felt the urge to track it down.
I have seen them on numerous occasions supporting bands in their current incarnation and previously as Remedy.
Listening to them you won't really be surprised to hear that they started out as an REM tribute band with lead singer Niall Holmes doubtless spending hours in his bedroom as a youth honing his Michael Stipe impression.

Endrick Brothers - The Ballad of a Film (Dylan to McGuinn)