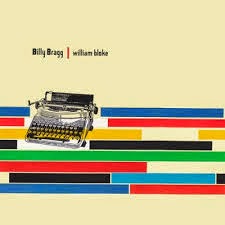 A few days ago Walter posted Northern Industrial Town a song from Billy Bragg's 1996 album William Bloke.
This inspired me to get it down from the shelves and to give it a spin and what a terrific record it is too.
An album which in my opinion is seriously underrated and which is perhaps the Bard of Barking's last truly great recording. Others, of course, may choose to differ.
Walter was also of the view that he may well be one of the last true musical poets and I would argue that he is not wrong there.
What lyrics
"I used to want to plant bombs at the Last Night of the Proms"
"He was trapped in a haircut he no longer believed in"
"He's got the bonhomie of a game show host"
"Should I vote red for my class or green for our children"
I could go on and on.
Alternatively you too could dust down your copy and give it a listen

Billy Bragg - The Space Race is Over