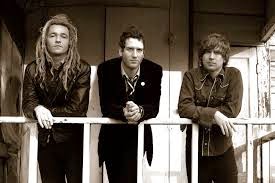 I once made Mrs CC a compilation of songs with the word happy in the title.
Not as easy as you might think when a large chunk of your record collection consists of country and soul songs which specialise in misery and heartbreak.
However, like the trooper I am I persevered.
One song which featured was Happy Kid taken from Nada Surf's 2002 album Let Go
Nada Surf are the trio of Matthew Caws (vocals and guitar), Doug Gillard (lead guitar) and Daniel Lorca (bass)They have been on the go since 1992 and are still going strong
The album also contains a French number Là Pour Ça which I thought a tad pretentious until I found out that Caws and Lorca met at the  Lycée Français de New York having both spent part of their childhood in France and Belgium.
Formidable!