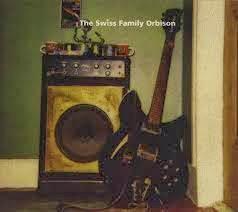 According to Haven, their record label,The Swiss Family Orbison "are an inspiring five piece from Dundee, Scotland, who create a powerful atmosphere of raw undiluted passion"
And when you hear these two tracks from their eponymous album from 1997  I'm sure you'll agree.
I bought this in Peebles on Monday for 99p and have yet to get beyond the first two tracks  both of which are absolutely terrific.
They consisted of Kit Clark, of Danny Wilson fame on lead vocals and keyboard, Keith Matheson on guitar and songwriting duties with Kit, Gregor Philp on guitar, Colin Davidson on bass and Dougie Vipond of Deacon Blue and BBC Scotland fame on drums.
Certainly a lot more ballsy than either Danny Wilson or Deacon Blue and I think this has to be put down as a total find!