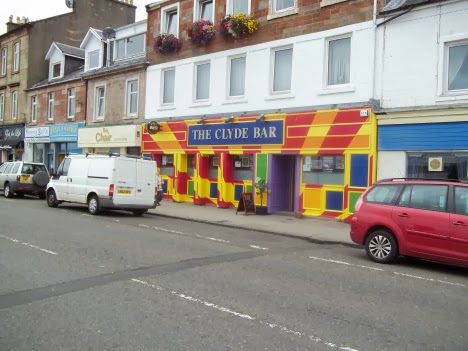 This will be a short lived series as the grand total of bands I have seen in Helensburgh is two!
Both Americana bands, both of which had a single female name.
First up were Jolene in the Clyde Bar on the 12th of November 1999 for the grand total of £5. The bar was a boring dark green back then as opposed to the multi- coloured version pictured above
As it was a Friday night my pal Gogs and I decided to make a night of it and pushed the boat out and stayed in a B&B.
Helensburgh is on the coast about 25 miles from Glasgow and is quite close to the Faslane Navy base which hosts Britain's nuclear arsenal strategically placed within spitting distance of Scotland's largest city .
Jolene were  a 5 piece from North Carolina consisting of John Crooke on vocals and guitar,Dave Burris on guitar, Mike Kenerley on drums, Rodney Lanier on  keyboards and Mike Mitschele on bass.
Sadly, Rodney Lanier passed away in 2011.
The band must have Scottish connections as their second album from which these tracks are taken on Sire from 1998 is called In The Gloaming.
Shortly afterwards they moved to Germany's Blue Rose label and I am also the proud owner of 2000's Antic Ocean
Part 2 next week - h'aud me back I hear you cry!

Jolene -Clear Bottle Down
Posted by Charity Chic at 08:00