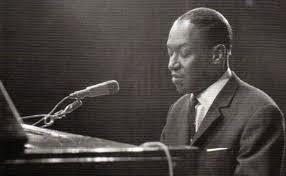 It's been a wee while since we have delved into the Blues Collection.
This time around it is the turn of  pianist Edward Riley Boyd (1914 -1994) born in Stovall's Plantation near Clarksdale, Mississippi.
As with many of his compatriots he moved first to Memphis and then on to Chicago to work in the factories there.
These two songs are from his Chicago period - I Got the Blues from 1951 and 24 Hours from 1953.
He wrote both these songs and I am familiar with other versions but I'm not sure by whom.
Like Champion Jack Dupree he got a bit fed up of the racial discrimination in the States and moved to Europe first to Belgium and then to Finland where he died in 1994.
He toured and recorded with Peter Green's Fleetwood Mac and John Mayall and the Bluesbreakers.
Gaun yerself Uncle Ed!

Eddie Boyd - I Got the Blues