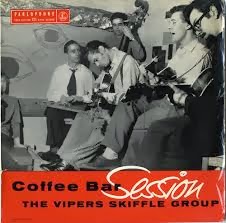 The Vipers with John Pilgrim on Washboard

Following a washboard featuring on a recently posted Blind Boy Fuller track I was challenged to come up with a Washboard Wednesday series.
I can't deliver a series as I don't have enough material so I suspect that this may be a one off although there may be the occasional future post if anything else pops up
The Vipers Skiffle Group, also known as the Vipers were fronted by Wally Whyton who went on to become a radio and TV presenter and were part of the Brittish skiffle revolution from the late 50's
They quickly found themselves in competition with that Tony Donegan bloke championed by Jim McLean's rabbit.
Hank Marvin, Jet Harris and Tony Meehan who went on to become The Drifters and then the Shadows were briefly Vipers.
The Vipers went the way of all things skiffle in the early 60's but left a legacy of terrific tunes

The Vipers -The Streamline Train

The Vipers - Pay Me My Money Down
Posted by Charity Chic at 08:00