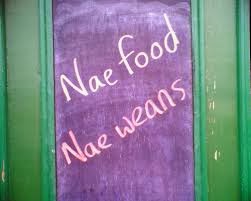 "The critically-acclaimed Nadine, from St Louis, Missouri, headline a mini rock festival in the unlikely setting of Helensburgh on Sunday.
Nadine's appearance at the town's Clyde Bar venue is another coup for local DJ/promoter Paul Shields whose Stateside Sounds aims to showcase the best of contemporary American music.
The band - Steve Rauner, Adam Reichman, Todd Schnitzer and Ann Tkach - are visiting Europe to promote their third album, Lit Up From The Inside. Their sound has been described as Tom Petty, Neil Young, Otis Redding and The Rolling Stones all rolled into one.
Other acts on the bill include Scott Macdonald, Freeloader, Haven and Dave Nicol."

And we were there - Gogs, Donno and me! Not sure as to the exact date sometime in December 2000 I think.
No overnight this time being a Sunday with work the next day and I  drew the short straw and was driving.

Adam Reichman came across as a top bloke. We had a drink and a chat with him and later saw him doing a solo gig in Glasgow a couple of years later.
The names Freeloader and Scott McDonald have put me in mind for a new series - Tartan Texans -- Scottish acts influenced by Americana. More later
I can remember nothing about the other two support act save that a violinist called Milla who has appeared with the Silencers played  with one of them.

Thus endeth the Helensburgh adventures.
Oh and a spotters badge for Ernie Goggins for working out  that Nadine were the band who would be featuring.

Nadine - So That I Don't Miss You