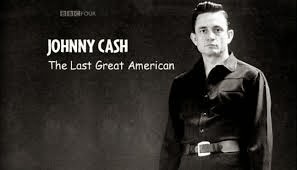 Johnny Cash was born on this day in 1932
George of Jim McLean's rabbit fame was born on this day in 1963.
One of these great gentlemen is being celebrated in music today and he was married to June as opposed to Jo.
Here two Scottish acts pay homage  to the great man and then a band named in his honour takes centre stage.
First up is a track from Scottish Indie favourites Sons and Daughters from their Love the Cup 2003 EP.
Then we have Kirkaldy's  finest, the late great Jackie Leven with the title track from an album recorded in Beirut in 2005.
I had to look up what Elegy meant.Apparently it is from the Greek and is a funeral song or lament for the dead. Michael Gove would obviously not be pleased. I would undoubtedly have known that had I not gone to a state school and rather my education had consisted of healthy doses of the Classics, rugby and brutality.

Finally we have the wonderful and wonderfully named Bastard Sons of Johnny Cash. Johnny had given them permission to use the name and his son John Carter Cash even produces a couple of tracks on their 2001 album Walk Alone.