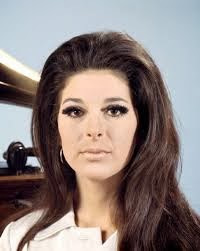 "Sunday Morning  turning on my deck again
Bobbie Gentry whispering in my ear again"
The first two lines of the previously featured Gradually Learning by The Rockingbirds
Amazingly Bobbie Gentry will be 70 in July.
A country girl from Mississippi she shot to fame with the fantastic Ode to Billy Joe way back in 1967.
A great story song which does not give all the answers but leaves the listener wondering and requiring to use his or her own imagination.
Unusually, for that time,she was a female country artist who composed and sang her own material.
She wrote several other extremely good songs including 1970's Fancy which contrary to what the lyrics would initially suggest she felt was her strongest statement for woman's lib.I would imagine that this song was quite controversial when it was first released.
Her duet album with Glen Campbell was one of the few albums that my folks owned. I thought the cover was pretty glamorous back then but I'm not sure whether it has withstood the sands of time 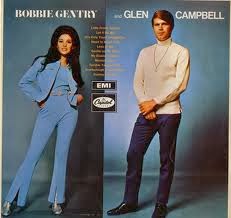 A true talent  but sadly one who only really shone for 3 or 4 years leaving a legacy of great songs.