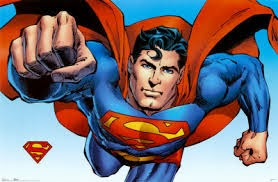 Is it a bird? Is it a plane? Or as The Flaming Lips would have it "Is it getting Heavy?"

Although Wayne Coyne and chums had been on the go since 1983 it was only really from 1999's The Soft Bulletin that they achieved a certain degree of mainstream prominence and critical acclaim.
This song is taken from that album which I purchased from Woolies in Leek for a couple of quid.

In March 2009  their most famous song Do You Realize?? was announced as the official rock song of Oklahoma. I heard it played at a funeral recently and it was particularly moving.
Chris Mills is an Americana singer/songwriter and hails from Chicago as opposed to Oklahoma.
He covers Waiting for a Superman on his 2003's Covers EP Tell it Like it Isn't.

Interestingly (or perhaps not) both artists appear to have enjoyed more success in Europe than in their homeland.

The Flaming Lips - Waitin' For a Superman

Chris Mills - Waitin' For a Superman
Posted by Charity Chic at 08:00