I Remember How The Darkness Doubled 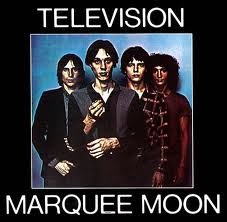 Undoubtedly one of the most iconic albums and album covers of it's generation.
Marquee Moon was Television's debut album released in 1977 slap bang in the middle of the punk revolution.
At the time of one and two cord, two to three minute records, the title track weighs in at a mighty 10 minutes 40 seconds about the same length of one of those pompous prog rock tracks favoured by Jim McLean's rabbit!
I've yet to come across anyone into punk who doesn't like this record. I suspect I may just have set myself up for a fall with that statement.
Tom Verlaine and Richard Lloyd have an element of musical ability that most bands at the time could only dream about.
I bought this in Echo in Byres Road, Glasgow along with Definitely Maybe by Oasis after an afternoon's drinking session - only one of these two is a classic which has stood the test of time and they are not from Manchester!
Relentless - but in a good way.