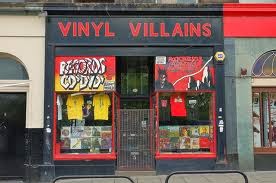 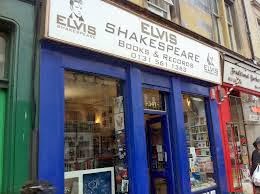 Last Friday morning I had a meeting in the Scottish Government offices in Leith.
When  it finished rather than rushing back to work I decided to meander up Leith Walk  and visited a few charity shops making a few purchases.
Half way up the walk I stumbled across the splendid Elvis Shakespeare record and book shop where some purchases were duly made.
Then I had a quick pint in the Windsor Buffet before checking out Vinyl Villians (no relation to the great man I assume) where for a couple of quid I purchased Boyfriends and Love a compilation of Girl Groups of the 60's.It includes such gems as the Shangri-Las, the Shirelles, Dixie Cups and a few lesser known artists.
It was good to see some independent record shops still on the go. Unfortunately they are few and far between these days.I know that I am preaching to the converted but they desperately need our support.
As a generation we were spoilt for choice but they are increasingly becoming as rare as hen's teeth.

Angels - My Boyfriends Back