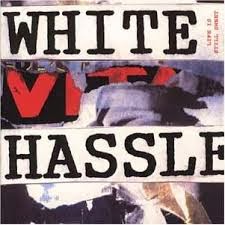 During a recent sojourn to Edinburgh (or Embra as us Weegies know it as) I purchased , amongst other things, a copy of New York band  White Hassle's 2005 album Your Language.
This is on Fargo and an attached blurb on Fargo albums compares them to The Modern Lovers, The Rolling Stones, Beck,Jon Spencer and Speedball Baby.
I can see the connection with the Modern Lovers and Beck but not with the Stones and Jon Spencer and I have absolutely no idea who Speedball Baby are.
My purchase was on the basis that I have had a copy of their 2000 EP Life is Still Sweet pretty much since it came out and it is I feel rather good.
However, it would appear that not everyone seems to think so as I discovered whilst doing some "research" on the band i.e. using the most commonly used search engine and on line dictionary.
It seem like a certain Steven Wells in the NME described Life is Still Sweet as "skiffle" but "not totally shit". I don't know about you, but that would, on it's own, be enough to make me go out and buy it.
Another critic mentions that turntables pop up here and there on the record, however they don't really do justice to the songs.
Someone else describes the title song as uplifting and a crowd favourite.
Ah, the joy of music -it's all about opinions!
See what you think.