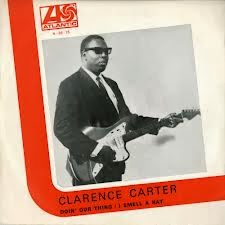 Clarence Carter from Montgomery, Alabama started out as part of a duet with Calvin Scott imaginatively called Clarence and Calvin.
Unfortunately Calvin was seriously  injured in a car crash which led to Clarence pursuing a solo career.
He started off on Fame prior to moving to Atlantic but ended up returning to Fame.
Most of his songs were recorded out of the legendary Fame studios in Muscle Shoals.
He had his first  major hit with Slip Away in 1968 and married one of his backing singers in 1970 (Candi Staton no less!) divorcing in 1973.
He is perhaps best known for Patches with recently featured on Jim McLeans Rabbit so you are not getting it here.

He was making hit records right up to the mid 70's before the Disco revolution kicked in.
Clarence has just turned 78 and thankfully is still with us

Clarence Carter - Snatching it Back
Posted by Charity Chic at 08:00