Jah Wobble - Memoirs of a Geezer 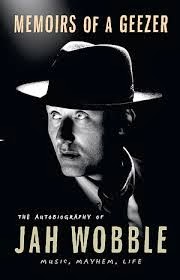 I've just finished reading Jah Wobble's autobiography -Memoirs of a Geezer.
It is funny and entertaining in places with some amusing anecdotes - my favourite being when he met Natacha Atlas' mum and went to shake hands with her and she bit him on the arm!
However in places he doesn't come across as a particularly pleasant person.
He portrays himself as a bit of an East End hard man come jack-the-lad (or geezer if you will) handy with his fists and single minded and not prepared to take any bullshit from anyone.
How much of this is genuine and how much is in there to help the book sell I'm not sure.
I particularly dislike how he is condescending and down right nasty about many of the folk he has worked with over the years.
He is particularly disparaging about Keith Levine,  for instance, and yet is back working with him a couple of years after the book is published.
I am only really familiar with his work with PIL and his two hit albums with the Invaders of the Heart; Rising above Bedlam (1991) and Take Me to God (1994) from which these tracks are taken.
I am aware that  he has released loads more albums since and I may get around to checking some of  them out sometime although after reading this book I would be less inclined to than before.

Jah Wobble's Invaders of the Heart - Visions of You

Jah Wobble's Invaders of the Heart - I Love Everybody
Posted by Charity Chic at 08:00