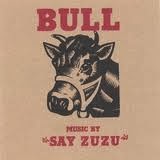 Without a shadow of a doubt Say Zuzu sported the finest sets of sideburns (or sideboards as our American cousins would have it) I've ever seen on a band.
An Americana band  from Newmarket, New Hampshire they were on the go in the late 90s/early 00's
On Bull, from 1998, the membership was Jon Nolan on guitar and vocals, his brother James on bass, Cliff Murphy on guitar and vocals and Steve Ruhm on drums.
In the States they recorded on Broken White Records but in Europe they were signed to Blue Rose the great German Americana label.
They were one of those American bands who seemed to enjoy more success on this side of the pond.
Indeed, when I saw them play a set in Cheapo Records in Austin the audience was almost exclusively British, German and Dutch.
A certain on line source tells me they also enjoyed success in Italy due in no small part to the patronage of Paolo Caru an Italian rock critic